Review: Beyond the Briar

A few months back I mentioned attending a small ceremony for the Sir Julius Vogel Awards, where among other things I got to meet my fellow nominees. Among them was Shelley Chappell, who was in the running for Best New Talent on the strength of her short story anthology Beyond the Briar.
We exchanged emails, we did lunch, and I came home with a copy of her book. As those who follow me on Tumblr will know, my dash is filled with art, illustrations and gifs that demonstrate my love for fairy tales, so I'm always on the lookout for a fresh take on the old material.
Beyond the Briar contains four stories based on Rapunzel, Rumplestiltskin, Sleeping Beauty and Cinderella, though with a little gender-flipping and setting changes, Shelley manages to turn the familiar beats of each story into something innovative and unexpected. Once they're removed from the traditional European backdrop, it's interesting to see how the mythologies, traditions and flavours of international cultures can change the shape and flow of the old stories.


And it's not like there isn't a precedent for this. After all, the oldest recorded version of Cinderella takes place in Egypt, in which the Pharaoh marries a young slave-girl called Rhodopis after the god Horus drops her show in the Pharaoh's lap, sparking a nation-wide search for its owner. And it doesn't take a genius to figure out that the roots of Beauty and the Beast are to be found in the Greek myth of Cupid and Psyche.
In many ways Shelley is transporting these stories back to older, stranger environments, and half the fun is finding out for yourself how exactly each fairy tale will be reimagined. As such, a part of me doesn't want to delve into specifics – but then again, what's the point of reviews if I didn’t?
"Stars on Dark Water" follows the template of Rapunzel, reinventing Rapunzel as a young man called Rudaab and setting the story in the Middle East. A merchant and his pregnant wife are separated from the rest of their caravan during a journey through the desert, only to find a beautiful oasis amidst the sands. There they drink from the pool and eat from the fruit trees, but it's while his wife is sleeping that the merchant meets the owner of the oasis: a beautiful witch.
The price of having trespassed is the eventual marriage of the merchant's unborn child with the witch's infant daughter – though the merchant dies without ever sharing this agreement with his wife or son Rudaab. It is a shock then, when years later a strange and powerful young woman appears in the encampment, demanding Rudaab's hand in marriage. Bound by his hair in the witch's tower, it's up to his sweetheart Azar to stage a rescue...
Next is "Ranpasatusan", a take on Rumplestiltskin that's set in feudal Japan. Sunny and her father are wandering minstrels and storytellers, never staying in one place for very long, and eventually travelling as far as the village of Hitachi in the east. There Sunny's father is critically wounded after he brags about his daughter's ability to spin straw into gold (even if he only meant it metaphorically). But the local daimyo takes him at his word and insists that Sunny turn a room full of straw into gold if she wants her father to get the medical treatment he needs.
This is the part where you'd expect the gnomish Rumplestiltskin to emerge and cut a deal with Sunny, but there's a twist in how Sunny's saviour is portrayed – one that's rooted in Japanese history and culture. No, I won't give it away.
"The Sleeping Maid" is my favourite in the collection, which does not feature the usual change in locale or switch in gender (except in making the evil fairy a male) but instead opts for telling the tale from an unexpected point-of-view. When the sleeping curse strikes the kingdom and the briars grow up around the castle, the family members of those who work in the palace are cut off from their loved ones. How do they cope knowing that their daughters, brothers, mothers and sweethearts are slumbering in stasis beyond the briars?
Gorran the blacksmith was due to marry his beloved Caterina; now he finds that an insurmountable barrier separates them. The years roll past and Gorran grows older, hoping all the while that he'll live long enough for the promised prince to arrive and break the spell so that he might see her one last time...
Finally, "The Old Boot" is a take on Cinderella (with a dash of Beauty and the Beast) in which a young cobbler's daughter called Beauty befriends Miguel, a farmer's son forced into servitude by his wicked stepfather and stepbrothers. When Beauty catches the eye of the prince, she's forced to leave Hay-on-Dell for the palace and begin the necessary transformation into a princess.
She hates it, especially since she left her heart behind with Miguel. But on the night of the masquerade ball, she dances with a familiar figure – one who leaves behind an old boot in his rush to escape the guards.
***
Taking a European fairy tale, shifting it to a different part of the world and making a few little tweaks when it comes to gender and motivation is a simple but very effective formula in reimagining these familiar stories as something fresh and new.
What they all have in common is that a romance lies at the core of each one, though these love stories (with only one exception) are between couples who have known each other all their lives. By eliminating the "love at first sight" narrative that's so prevalent to fairy tales, powerful and transformative love is instead portrayed as something that exists between best friends and childhood sweethearts, making all the couples and their affection for each other feel warm and grounded and genuine. It's easy to hope for happy endings if you can really believe in the love as it appears on the page.
If you're interested in reading them for yourself, here's a link to Shelley's website, where you can purchase them in paperback or as an e-book (either separately or together).
In short, if I had to sum up this book in a single image, it would be this one: 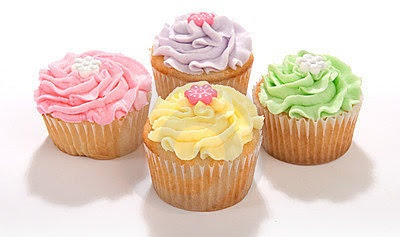 Like cupcakes, these stories are small, light and very sweet.
Posted by Rav at 7:53 PM

Email ThisBlogThis!Share to TwitterShare to FacebookShare to Pinterest
Labels: beyond the briar, book reviews