I’m not sure anyone was in a huge hurry to see more of Woody, Buzz, Jessie and the rest of the gang after their glorious send-off at the end of Toy Story 3 – not because we didn’t love them, but because… well, why mess with perfection? Why go back to the well and risk overexposure? Why compromise that utterly sublime ending?

I’ll get to Toy Story 4 in due course, in which many of these fears did in fact materialize, but the shorts and specials that were released between 2011 and 2014 were delectable little trifles that gave us more adventures of the toys without backtracking on any of the developments or characterizations of the movie trilogy. For now at least, I can continue raving about the continued success of the franchise. 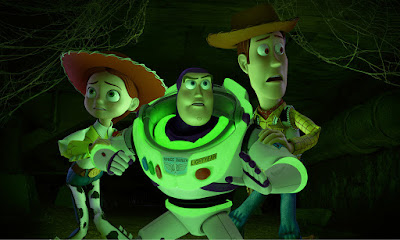 This, plus the Christmas Special (Toy Story That Time Forgot) and three short films (Small Fry, Hawaiian Vacation and Partysaurus Rex) all work beautifully as a sort of coda to the trilogy, giving us glimpses into what is essentially the toys’ happy ending with Bonnie, the new owner who loves and cherishes them, and who they can protect and nurture in return. With that in mind, you can’t blame Pixar Studios for wanting to play a little longer in this particular sandpit.

I’ll get to the rest in good time, but for now, in honour of Halloween: Toy Story: Tale of Terror!

Angela Barrett: The Most Wonderful Thing in the World

My last post in this series covered Angela Barrett’s earliest work (The Wild Swans) and this one examines her most recent: The Most Wonderful Thing in the World by Vivian French. It’s an original story, but one infused with a fairy tale ambiance in its illustrations of an Edwardian-era Venice. Though it has none of the symbolism or potency of our oldest tales, its sweet little love story manages to find a clever loophole in the familiar “most worthy suitor” clause. 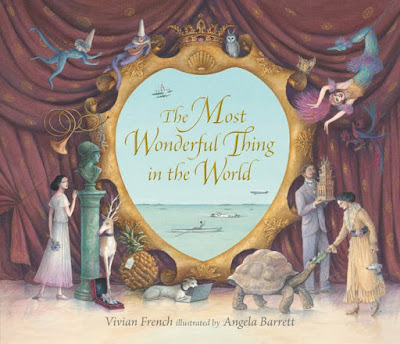 Through dozens of little vignettes set alongside sweeping two-page vistas, Barrett creates an ornate Venetian city of villas, islands, canals and piazzas, where the Princess Lucia freely roams while her parents puzzle over the challenge they have set her potential suitors: to win their daughter’s hand, they must first be presented with the most wonderful thing in the world. Fittingly, the book is filled with possible answers to this riddle: automobiles and acrobats, gemstones and jewellery, exotic animals and optical illusions…
Read more »
Posted by Rav at 7:28 PM No comments:

As I’m sure you’re aware, the New Zealand election is over, and it was a landslide. Though I wasn’t prepared to take anything for granted, the writing was pretty much on the wall when it came to a Labour victory – but the sheer extent of the red wave (and here, that means left) caught everyone by surprise. Not only is Labour a majority government – a thing unheard of since 1946 – but several electorates that have been held by National MPs for up to twenty years have flipped.

This giraffe (called Giraffe Crossing) was based on a fairly straightforward concept by artist Mark Catley: its minimal black lines creating an illusion of both bandages and zebra crossings. Together they remind Christchurch residents of the rebuild in the wake of the earthquakes – not only the visible wounds, but also the need to carefully pick a safe path around the debris. Okay, it’s a bit of a stretch, but that’s what my guidebook said.

Of more interest to me was learning that this sculpture was in Hazeldean Business Park, a place I’d never visited before. What, pray tell, was a business park? Turns out it’s just a square of grass outside an office block and next to a carpark. Which turned out to be rather hazardous, as someone managed to drive straight into this sculpture, requiring it to be removed for repairs for a couple of weeks.

It was standing by the time I got to it, but it wasn’t one of the most memorable contributions, and not even the only one to utilize a zebra motif. But we’ll get to that one in time… 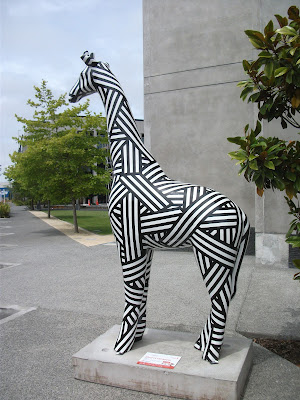 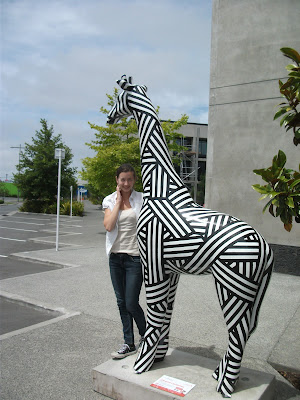 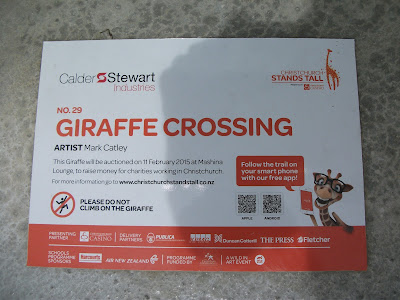 Not much to report: everyone and everything is stressed.

We’re in the middle of elections, which is good because it means they’ll be over soon, and whichever way it swings at least I can stop worrying about them (I don’t think I’ve been consciously worrying, but I feel like I’ve had a headache for the last four weeks, not helped by the perpetual smirking of Judith Collins. Ma’am, you haven’t done anything worth smirking about yet).

Fandom is… about the same. Dramas erupt and dissipate, people argue about the latest announcements and then wonder how long they’re going to have to wait before seeing new material, and no one seems to be enjoying anything. If Hollywood wants to start recuperating losses on their blockbusters, I’ve no idea why they don’t start releasing things in New Zealand (okay, I know why – they want to avoid pirating and spoilers). But I noticed that Disney+ plans to release Pixar’s Soul on its streaming service: I hope at least we get the chance to see it on the big screen down here.

Email ThisBlogThis!Share to TwitterShare to FacebookShare to Pinterest
Labels: links and updates

Legend of the Seeker: Bounty

The one with the bounty hunters.

I have a long-held theory that the second episode of any multi-episode television show is always… kinda naff. The writers have thrown everything they’ve got into the premiere: the character introductions, the main premise, the threat the villain poses, the underlying themes and storylines, and enough explosions or swordfights or sex scenes to get the viewer’s attention…

And then the second episode rolls around and they’re in a bit of a slump. Most of the hard narrative work has already been done, but it’s still too early to delve into the deeper nitty-gritty of the plot or world-building.

The episode, almost by necessity, has to be mediocre.

Email ThisBlogThis!Share to TwitterShare to FacebookShare to Pinterest
Labels: legend of the seeker 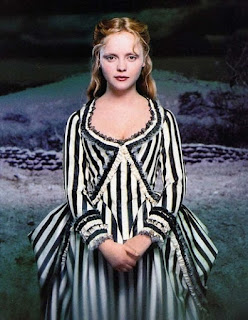 Every October I rewatch Tim Burton’s Sleepy Hollow, the most quintessentially Tim Burtonish of all his films (excepting perhaps The Nightmare Before Christmas). This is especially true in the visual sense. A very pale Johnny Depp, a Danny Elfman score, a queasy mixture of dark humour and traditional horror, and the beauty of grotesquery – whether it be a twisted tree branch, a beckoning hand, or a tendril of mist drifting over a 19th century pasture. The only thing missing is Helena Bonham Carter, but I think this was released before they met (Lisa Marie cameos instead).

And then there’s Christina Ricci, and all things considered, it’s quite stunning that this is the one and only time she appeared in a Burton film. I mean, this is Wednesday Addams and the girl from Casper! She slips effortlessly into his dark fairy tale aesthetic.

Like so many female characters in these kinds of movies, Katrina van Tassel is more interesting as performed than as written. When we first meet her she’s simply the demure and wholesome daughter of the town patriarch; quickly advancing to the caring and understanding love interest to Ichabod Crane – though it doesn’t take much of a genre-savvy viewer to realize there’s more going on with her.

She hides books, she makes odd comments, she seems fearless in the face of overwhelming danger. Is the whole “sweet and innocent” routine just an act?

The fact that her true intentions are hidden as part of a narrative red herring means that her guarded veneer is upheld just a little too long for us to get to know the real Katrina beneath, and the insurmountable self-possession that Ricci gives her too often slides into a sereneness that doesn’t mesh with her circumstances. She gets in one good scream and two fainting spells, but other than that, demonstrates no strong emotions throughout some pretty traumatic events.

But that reserved exterior is clearly hiding a sharp mind, and things take a turn for the sinister when she’s depicted standing over a cauldron to brew a potion, and later drawing a strange symbol on the floor of the church. For a hot second she’s the lead suspect in the case of the headless horseman… before Ichabod realizes it’s her stepmother instead.

Sadly she’s allowed no agency beyond the act of running when it comes to the final defeat of the horseman and his mistress, but that undermines her little acts of subversion and protection throughout the film: the strange symbol is revealed to be a charm of protection, her potion one of healing that guides Ichabod through his fever, and the book of spells she gives him stops a bullet that would have otherwise killed him. Unlike her stepmother, her magic is guided by love.

In many ways she and the Lady van Tassell are held up as foils: both witches practicing their craft beneath the roof of a clueless father/husband, each forced to hide behind a meek façade despite very real power at their beck and call, and ultimately each one the axis upon which the plot turns. I can’t help but wonder what might have been had the second Lady van Tassel seen her stepdaughter as an ally instead of a rival – but that would have required more of an in-depth exploration of these women than the film was willing to give them.

(For what it’s worth, the original script had more material for both of them, including some scenes of them alone together).

Katrina van Tassel is perhaps a more interesting character in theory than the script ultimately allows her to be – I would argue that thanks to her cleverness, power and proximity to the plot she veers very close to becoming an example of Trinity Syndrome – though ultimately it’s Ichabod who cracks the case and saves the day (he’s got this whole science versus superstition thing going on, whatever).

But there’s something compelling about her, and there’s so much to ponder in the gaps the script left behind: her relationship with her mother, her learning in witchcraft, her opportunities in New York… and of course, where she got that awesome black-and-white striped dress.

Email ThisBlogThis!Share to TwitterShare to FacebookShare to Pinterest
Labels: woman of the month
Older Posts Home
Subscribe to: Posts (Atom)